Well, I may have spent the past two days sick in bed, but tonight, I’ll finally be getting out of my PJs (or maybe just putting on a more socially acceptable going-out kinda PJs) for this event right here: 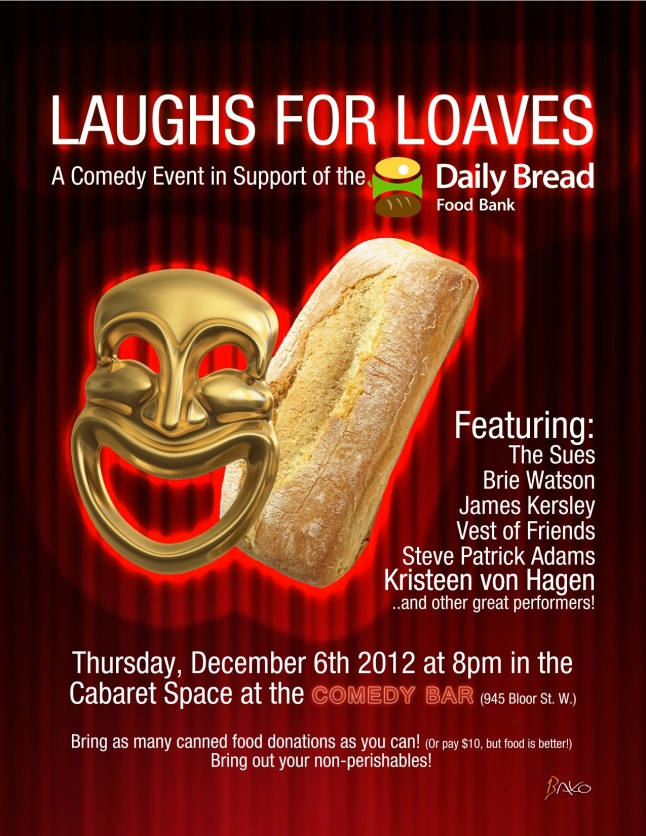 (Since the poster was made, we’ve also had two great additions to the line-up: Ned & Dave and Mark DeBonis. Huzzah!)

If you’re thinking about coming, and you’re not sure what kind of food items to bring, check out what some of the performers’ favourite canned goods and maybe you’ll be inspired:

“Pumpkin Pie Filling (although if they could actually ‘can’ the nature of ‘good’-ness, that would be the tops)”

“My favorite canned good is the laughter on the Flintstones.”

“Peaches… millions of peaches. we love canned peaches so much that we moved to the country where we found a nice man who put fresh peaches in a can. for us and only us… he did make us kiss him in his little dun buggy for each can, but they’re so delish that we were okay with it.”

“Tuna combined with a can of corn. It’s a cheap student meal of protein and whatever corn is. (Chef Boyardee Ravioli is a close second)”

Canned Pizza. It doesn’t exist yet but we’re working on it. We figure people like pizza, so why not put it in a can? Get it? We’re smart.”

All great ideas!  Maybe some of you will end up bringing some canned pizza of your own to give to:

This is happening tomorrow night:

I had the chance to catch up with some of the amazing acts performing on this show to ask them how they REALLY feel about mustaches and facial hair:

“There are those for whom I think it’s essential: Cult Members, Cult leaders, Indie Folksters, Wizards.  For others I believe it is appropriate without being strictly necessary: Cowboys, Ring Leaders, Dock Workers, Henchmen. And, of course , there are those for whom facial hair is an absolute no-no: Babies, Police Officers, Amateur Ironists, Anglican Priests.” – Scott Montgomery, Falcon Powder.

Here’s another opinion about who should and shouldn’t have facial hair:

(I’ll be sure to make an appointment to get my upper-lip waxed – AFTER tomorrow’s show!)

What do the mo-sistas think about facial hair?

“LOVE, LOVE, LOVE it. Love it. Seriously. LOVE IT! Oh my god. Even thinking and typing it makes me happy. I am a beard lover, but I also love an ironic mustache!” – Debra DiGiovanni

Well, you are going to LOVE the ‘staches at Comedy Bar tomorrow night Debra because comedians are only capable of growing mustaches ironically.  Little known fact.

Check out this coming-of-age-and-stache tale:

“We didn’t realize it was quite so much work! All of the waxing, flexing, watering it every day, etc. We feel a new respect for people that wear them all year round. The biggest problem is that it wakes us up all the time. We roll onto our faces as we sleep and it pokes us. Rolling onto your face as you sleep is normal, right?” – Marc Hallworth, Vest of Friends

Wondering whether or not any of these acts have grown mustaches this Movember?  Come to the show and find out!  Here are a few hints for ya:

Finally – if you were on the fence at all about coming to the show tomorrow night, maybe because you’re offended that people have been calling you ferret-face all month, and they have, read on to find out why these hilarious comics think YOU should be there:

“Its the end of another Movember and it needs to be glorified. Plus, Movember is for a good cause, laughing is awesome and it’s Wednesday. what else are you doing on a Wednesday, jerk?! :)” –Debra DiGiovanni

“Because making prostate cancer and subsequently this yearly blight of terrible moustaches a thing of the past is a doubly good cause.” – Scott Montgomery, Falcon Powder

“Beacuse we heard that Tom Selleck, Hitler, AND Ned Flanders will be there! How can you miss those classic staches!?” – Marc Hallworth, Vest of Friends

“People should come to Laughstache tomorrow because if they don’t Rob Ford will light a flaming bag of his own poop on your doorstep. He has a lot of free time these days.” – Ben Miner

And ladies and gentlemen, I really do NOT want a piece of shit on my doorstep, OR the flaming bag!

So come on down!

All proceeds from ticket sales are going directly to the

For more information about the show, check out Impulsive Entertainment‘s website.

The Toronto comedy scene can be quite competitive.  On any given night, you can be competing with several other comedy shows.  I’m only in year-two on the scene and I regularly get bombarded with Facebook invites to attend  multiple shows that conflict with each other time-wise.

Comedy can also be very selfish.  Your buddies could be putting on the show-of-a-lifetime, but if you’ve got even the remotest chance of getting some stage-time somewhere, you’re going to bid them good luck and be on your merry way.

This can be a bit discouraging for those just starting out – it’s hard to break into a scene that’s already saturated with show after show after show of more of the same.  But it warms me to know that one troupe in town will always make time for the newbies.

The Vests host an open-mic every Wednesday night at Celtes Pub in the Junction and it is, in my experience, predominantly attended by current and former Humber students.   It’s a great room to try out material amidst a group of people who truly support each other.

The room continues to thrive even after the Vests have left the hallways of Humber behind them and move on to greener pastures.  (Keeping my fingers crossed that they get a spot at Just for Laughs this summer.)

When I was in first year last year, I couldn’t help but be grateful every time the second year students attended our performances, knowing they didn’t really have to be there.  They’d been there in their first year, knew the score and had taken it upon themselves to support the newbies.  But that the Vests (and the few grads who attended the Archival Show tonight–notably Steph) attended a performance for people they rarely see and hardly know,  is really awesome — I think anyway.  I mean, at least they saw us in the hallway from time to time last year!

I’m going to do something that all of you in first year, and those of you in second year should do — out of respect for their support, because they canceled Sirens to see you and us, and because they’re just a damn funny sketch troupe — I’m going to go watch the Vest of Friends shows as often as I can. 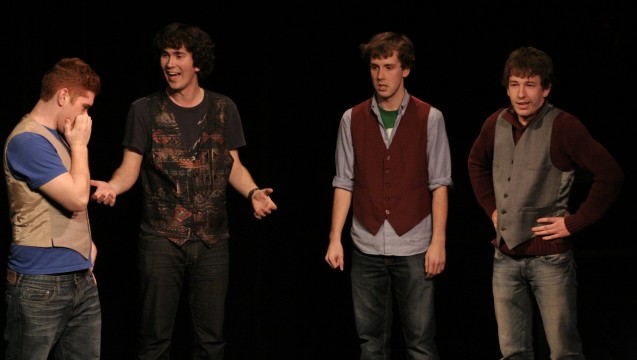 Also, the Vest of Friends are performing at Comedy Bar  on Friday Feb 17th – so… yeah.   Remember what I said about “conflicting shows”   Uh, oops.

I’m excited about all this stuff happening for LaughDraft and I’m simultaneously frustrated.

There’s lots to be excited about.  For one, there’s the upcoming Halloween show at Comedy Bar:

This is exciting because:

We were also selected as the one troupe from Humber to be submitted into the Toronto Sketch Comedy Festival (which my class friends and colleagues are quick to point out is only due to the fact that we are currently the only performing-sketch troupe in the program so far this year.  To which I say: Default performance in SketchFest is better than no performance at all.)

Why this is exiting:

For everything there is to be excited about, it’s difficult because there are always some people ready to downplay the achievement, however meager it may be in our just-beginning careers and for what purpose?  I simply do not understand.  Are they still in that “it’s cool to be apathetic” stage?  Do they simply not want to be a part of this but feel obligated to stay on?  But again, for what reason?  I just don’t get it.

I wonder if it’s to do with the fact that I’m older.  Or  that apathy has naver been in my nature. I crave DOING.  I crave things to give a shit about!  Maybe it’s relative to what you put in.  I put a lot into LaughDraft, creatively and professionally.  I do a lot of the organizational aspects of it, I try to keep our meetings on track.  I often meet with Andrew to discuss Humber’s involvement and have done since the very beginning.  Because of that, I expect the same enthusiasm from all the others.  Here’s the problem.  It’s not them. It’s me.  Maybe I just have unrealistically high expectations. When something excites me, I expect it to excite the others in the group.  And it does some.  And others not.