Where have you been all my life?

OK get ready to have a comedian talk about sports and athleticism.

I’ve never been a good runner. I was diagnosed with exercise-induced asthma when I was a teen, which never stopped me from physical activity per se, but more often than not the condition would surface when I was running. Not so much when I was playing sports like volleyball or tennis, it wasn’t even that bad when I played soccer, which it turns out, is a very runny sport.

I was an army cadet for six years when I was a teen, and running was always the greatest challenge there too. Shooting rifles, I could handle. I wish we could have done more of that and less PT, but it turns out people in the army LOVE running!

In every circumstance, running was something that had to be done either in competition with others, or in unison as a group. There was always a very high expectation to run at a certain speed, which can be incredibly difficult when your bronchial tubes close up and leave you gasping for your life source.

Sometimes I’d fall behind, no longer being able to take in enough oxygen. The feelings of shame and inadequacy mounted. I’d never get this badge, or make this rank, or join this team because I couldn’t run for damn shit.

Surprisingly, I developed a negative association with running!

Digging deeper, it’s become so obvious anxiety has a big role to play when it comes to my running history. The more I felt the expectation to run a certain speed or pace, the more I wasn’t able to do that, I would inevitably psych myself out throughout a run and talk myself out of future runs. Even within a run, if I started running out of breath, the voice of anxiety would have me thinking all kinds of anxious thoughts (what if you faint right here in the park and wake us in a crackhouse?) and instead of slowing down, I’d just stop the run and go back home with my anxiety-ridden tail between my legs.

Why would anyone run when the whole time you’re thinking “I suck at this, I can’t do this”?

That being said, there were a few times in my life when I have tried to get back on the running train because I know it has so many benefits for physical and mental wellbeing. I also love the idea of going out and running on my own, knowing it’s an easy way to take care of my own fitness inexpensively, and without depending on anyone else to get it done.

It wasn’t until just recently, I discovered on my Headspace meditation app, a collaboration between Headspace and the Nike Run Club, where they offer guided runs – similar to the guided meditations I practice for mindfulness. Only this time, you add in the running element of it and badda-bing, badda boom, you get mindful running.

I don’t mean for this to feel like an ad, but hot diggity dog is it a game-changer!

OMG Maybe I should make an app like this for someone’s first improv class. OK I digress…

Suddenly I have permission to run at my own pace, I give myself some grace for having difficult thoughts, and I’m encouraged to keep going instead of being shamed – as a result, I’m running further distances, challenging myself and more importantly, actually enjoying the activity and wanting to do it more.

It feels good not to feel bad going for a run!

In the Niagara Region, we have this gorgeous path all along the Welland canal, providing excellent views, friendly passers-by, and an overall quiet and peaceful setting for a great run. And now that gyms are open again, when the weather is too wet or chills down in these parts, it’ll be that much easier to get on a treadmill without fearing it – you know, kind of like Kevin and the furnace in his basement when he realizes it won’t hurt him.

It feels so stupid to write an entire post about one of the most common forms of exercise in humanity, but like anything in life, if we develop unhealthy relationships to things, even beneficial ones, it takes some work to get to a place where we can be present with it and accept it in a light that works for us.

So I’m happy to say I started running again. Not well, and not often, but I started nevertheless. And I am actually really, really enjoying it.

Yesterday, I walked down to the basement, or to the “Brie-cave” as my brother refers to it.  There, my cat was in her litter box, taking care of business, as it were.  She looked up and saw me, and was immediately filled with such joy and excitement that she felt the need to run out of her litter box before entirely finishing her business.

It was like a slow motion scene from a movie – her liquid cat discharge spraying everywhere!!

(I feel the need to mention she recently had to switch cat food to a hypo-allergenic brand, and it seems her internals are still adjusting to her new cuisine.)

She leaped onto the couch where I was now sitting and smeared a giant streak onto my oh-so-comfy blanket, which immediately made its way into the washing machine.

And so I got to thinking about life.  I mean, when was the last time you were SO excited about something you literally just shit everywhere?

It must be very freeing. 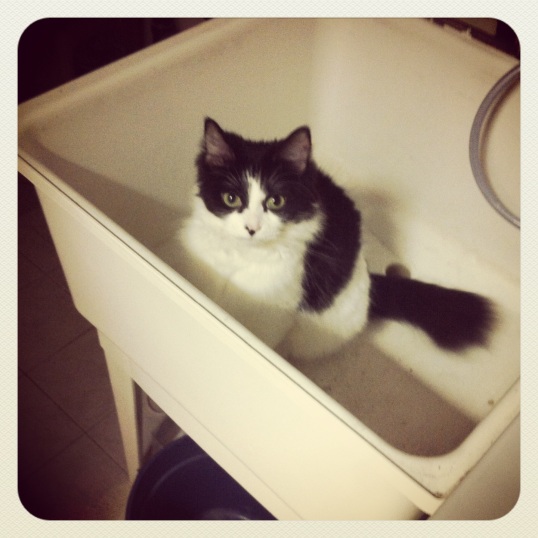 “Master says I gotta keep my butt in the sink for the next 2 weeks.. minimum!”