We find ourselves at the beginning of another New Year, and like many bloggers, this is as good an opportunity as ever to think back over the past year and try to find some meaning in everything before moving on to the next.

Am I ready for a new year?  Yes please.

Ok. So maybe I’m oversimplifying things by focusing on some pretty negative and shitty experiences. Like, maybe turning 30 isn’t so bad. And losing a pet is awful, but we know they don’t live forever when we bring them into our homes at the get-go. And when they’re super sick, sometimes it’s best to know they’re no longer in pain.

And as far as the job goes, I wasn’t a huge fan of the position quite honestly, and really welcomed the change. Also, because I’m a unionized employee, I was found another position within the corporation and have been totally loving the new challenges, coworkers and environment.

One year ago, I moved into an apartment in Bloorcourt; the heart of Toronto’s indie comedy action. I thought it would be the best place to live/be. As it turns out, my apartment overlooked the neighbour’s balcony and they could see directly into my tiny bedroom/kitchen, their cigarette smoke and blathering idiocy seeped in through my window, which was often left open given the ridiculous lack of temperature control in the building. I moved in 2014, again. Up the road, and this time, with my partner of 4 years, Dan. It’s already nice to have food in the fridge, cable TV, and someone to hug when I get home from late-night comedy shows who isn’t a cardboard cutout of Seth Rogen hanging behind my front door purposed to frighten off potential intruders.

I gave birth to a few babies this year: 50 Shades of 50, The Benoits, Exit, Pursued by a Bear and my fondest little project, Guess Who’s Coming to Improv? Each of these groups/shows have brought joy, fun and a stage to play throughout the year. I am incredibly grateful to all those involved, you know who you are. And if you don’t think I’m talking about you specifically, I am, so don’t worry. You’re amazing. I also adopted Improv Game Show, who continues to grow every single week; and I am as proud as an adopted parent could be of its’ potential.

Non-metaphorically, I welcomed a new brother into my family this past summer, as he and my sister threw the best damn wedding I’ve ever attended. And I’ve been to a few weddings in my short years on this earth, folks. This was hands down, the best. It brought my whole family closer together and it was such a gosh-darned delight to see my now 94 year-old grand-maman stand-up at her walker to boogie down to a few tunes.

I got to work with my brother and my boyfriend on a comedy project; a TV pilot about my hometown. Though nothing came out of the competition part of it, we still plan on creating something together out of the concept and working on other projects as well. We might totally be the next Jake and Maggie Gyllenhaal, but like, Canadian, …and funny.

I was hired by my dream employer last year to teach improv workshops for students both in English and en français; and every chance I get to share a teensy bit of what improv has done for me to other people is like a tiny little miracle.

I went to New York City to learn more about writing humour. I read both Keith Johnstone’s and Rob Norman’s book to learn more about improv. I read Mindy Kaling, Martin Short and Andrea Martin’s books for inspiration and am now onto Amy Poehler’s. I listen to podcasts about comedy and improv and society and life and I am more motivated than ever.

2014 was a good year. Tt felt like momentum was beginning to pick up. My hope is to keep up the pace and trudge on forward. It’s an interesting thing, finding what you love and working towards doing it as often as possible and trying to make a life out of it. It’s not easy all the time, but it sure is something.

Even though I still miss Peanut like fucking crazy.

Happy New Year my darlings. To an amazing year ahead!

Friends and supporters of cat humour, you’ll be pleased to know the newest episode of my attempt at a low-budget webseries is now available on YouTube to be viewed by all!

Huge thanks to everyone who came out to support Nola & my little comedy show to raise money in support of Gilda’s Club Greater Toronto!

Here are my pre-bed thoughts about tonight’s show:

2) If you weren’t there, you should have been.

3)  I have so many mugs left over.  Do any of the performers who left early want a free Humber mug?

5)  I hope nobody breaks into my apartment and steals the money we raised for Gilda’s Club tonight!  Quick Peanut, guard it with your life! 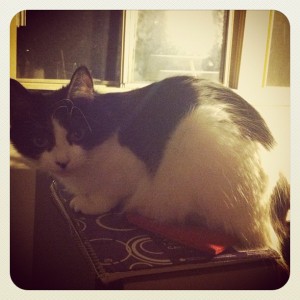 It's in that red thing under her butt.

I have so much more to say about the show tonight, but first: sleep!