Clown College is officially over!!!!  (with the exception of graduation, which will be happening in June, but who cares about actually graduating??!?!  [I do, I made the Dean’s list!])  When I finished University, my Mom really wanted graduation photos, but I never got around to taking them.  She might get what she asked for this time around, except I need to warn her, she’s not allowed to complain about the giant red nose.

On a different note, as the impending sense of dread looms nearby, we were given one last educational tidbit before calling it quits for the summer.  Pam Thomas, casting agent, producer, manager (etc.,) who’s worked with Lorne Michaels at SNL, with KITH, with some of the SCTV crew and managed Maya Rudolph (etc.) came by to talk to us a bit about what happens après Humber…

Everything she said made sense:

A one-on-one meeting with the guru turned into a one-on-two with someone who graduated 7 years ago and is currently touring the Yuk’s circuit while simultaneously working retail to get by. That’s what we call an “eye opener.”

I was worried there wouldn’t be much use for a blog that was meant to document my time at Comedy School after I graduated, but it looks like this is really just the beginning.   There’s probably enough in the self-reflective element of this business that will keep me (and hopefully you) interested… for the next 7 years at least!

And if not, here’s a picture of my cat: 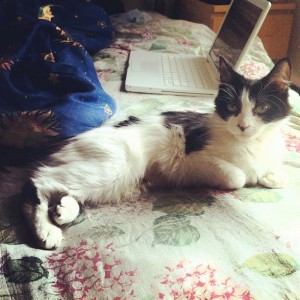