We’re in the midst of rehearsing for two days of 3-camera shoots (a la SNL) of parody sketches we’ve written.   We’re filming next week.  I can’t wait to see my Star Trek sketch come to fruition on screen.  I’m a bit nervous about playing a prostitute, primarily for the protection of my own self-esteem.  Perhaps I should consider forgetting the concept of self-esteem entirely for the rest of my second year at Humber and just go with the flow, as qotsa would say. Perhaps I should give up eating.

I performed a stand-up set as a dog sweater in class.  It went over terribly, although I still stand by my jokes.  Particularly this one:

“I’m not saying you have to be dumb to buy a sweater for your dog, I’m just saying I’m sorry your barren.”

Another big development – the sketch troupe I’d been performing in, LaughDraft, dissolved this past week, for several reasons.  It’s too bad because we actually experienced some modest success at our shows, ie: people came to them.  We got ahead pretty quick in the game, what with our entry into this year’s Sketchfest – and we were starting to be asked to perform with other Toronto troupes around town, but I guess, ultimately, it was not meant to be.

I hope it doesn’t take too long before I find people to sketch with.

Oh November – getting dark at 4:30 does not do good things for one’s personal motivation or morale.   Good thing I already put up my Christmas lights!  #livingalonerules #imsimultaneouslylonely

The current project we’re working on at school is a 3-walled shoot of a sketch parody we’ve written.   I’m excited to say that my parody was selected as one of the sketches to be filmed.  However, the upcoming rehearsal schedule is a little daunting; especially considering I still have to go in to work, I also have three additional assignments due this week and LaughDraft is performing at the Hard Luck on Tuesday.  This is going to be nuts.

I wonder if anyone else is feeling the pressure of this impending week of parody doom?

I’m in an article that also mentions the Kids in the Hall.  16-year-old Brie is losing her shit:

Check out the article:

I’m excited about all this stuff happening for LaughDraft and I’m simultaneously frustrated.

There’s lots to be excited about.  For one, there’s the upcoming Halloween show at Comedy Bar: 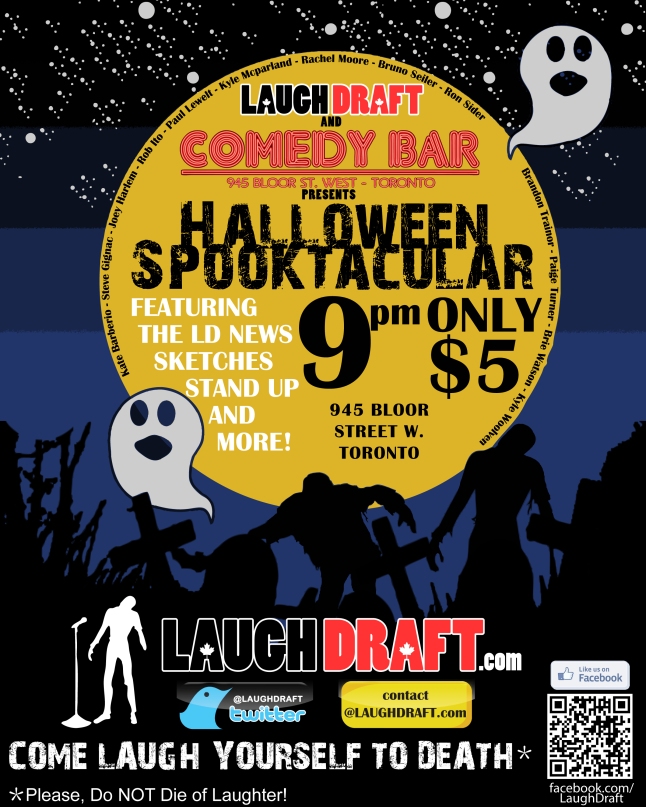 This is exciting because:

We were also selected as the one troupe from Humber to be submitted into the Toronto Sketch Comedy Festival (which my class friends and colleagues are quick to point out is only due to the fact that we are currently the only performing-sketch troupe in the program so far this year.  To which I say: Default performance in SketchFest is better than no performance at all.) 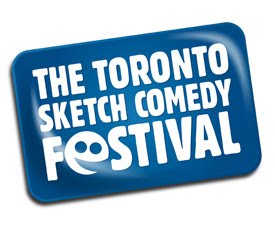 Why this is exiting:

For everything there is to be excited about, it’s difficult because there are always some people ready to downplay the achievement, however meager it may be in our just-beginning careers and for what purpose?  I simply do not understand.  Are they still in that “it’s cool to be apathetic” stage?  Do they simply not want to be a part of this but feel obligated to stay on?  But again, for what reason?  I just don’t get it.

I wonder if it’s to do with the fact that I’m older.  Or  that apathy has naver been in my nature. I crave DOING.  I crave things to give a shit about!  Maybe it’s relative to what you put in.  I put a lot into LaughDraft, creatively and professionally.  I do a lot of the organizational aspects of it, I try to keep our meetings on track.  I often meet with Andrew to discuss Humber’s involvement and have done since the very beginning.  Because of that, I expect the same enthusiasm from all the others.  Here’s the problem.  It’s not them. It’s me.  Maybe I just have unrealistically high expectations. When something excites me, I expect it to excite the others in the group.  And it does some.  And others not.

It has been a busy week.  Most of the week was spent rehearsing and memorizing lines, leading up to LaughDraft‘s first live performance since our Launch Show back in June.  All this, while trying to keep up with school work!  You’ll be pleased to know that the show went very well!

The next day, I’d been offered a chance to check out a taping of the Ron James Show at the CBC building by my Sketch and Improv teacher, Robin Duke.  I figured, though he’s not necessarily a comedian targeting my demographic, what the hell!  Why not?  It’ll be cool to see a live taping of a comedy TV show and I’ve never been to the studios at CBC, so shooo, let’s go for it.

As such, this blog entry will analyse certain of the differences between these two shows; the LaughDraft SEASON OPENER and the taping of two of the episodes in Ron James’ 3rd season with his own show on the CBC.

Have you ever been to the CBC building?  That place is COOL!  We were up on the 10th floor in a studio not unlike those I visited during my tour of NBC Studios in New York.  The sound was crisp, the equipment was pro.  The set was very cool.  The air flow was very comfortable.  The seats were nice.  They had to bring more in to accommodate everyone who had come to the show that evening.

The Kapisanan Philippine Centre for Arts & Culture’s performance space is in a basement.  The sound was muffled by a perpetual talk-radio background for some unknown reason, the mics, not strong enough.  Some of the actors could not be heard at the back of the room.  The equipment had just been installed that day.  The lights, put up by our “crew” aka Joey, who had the day off.  The air flow was, wait… what air flow?  It was hot and humid as sweaty balls in there.  The seats were from IKEA.  If anyone else had come, they would have had to stand.  The pipes were dripping on spectators and performers alike.

Upon arriving to the CBC building, there were many security guards who directed us to where we needed to go to pick up our tickets.  Then we stood in a massive line in the CBC building’s main atrium? (Is it an atrium?) and waited for ushers (not-uniformed, I should specify) to bring us up the fancy scenic elevator, down the hall and to the left and finally to our seats in the studio.  The joint was packed.  Average age was probably 50ish.  Get ready for jokes about people who don’t know how to  use Twitter everybody!!  Consistent laughter, even when RJ had to repeat the joke over and over again to get it right for TV.  Which is weird.  Imagine going to a stand-up show and hearing the comic tell the joke, and then come back at the end of the set and say: “OK, apparently I messed this one up or you guys didn’t laugh hard enough, so here we go again!”  Stand-up would be an easier business if that were the case, methinks.

People drizzled into our show.  There was no gigantic line-up.  The outside was poorly lit, so I’m surprised people were able to find us in the first place (Thank you Paige and Ron for drawing the crowds in!) They’re just as good as ushers, and better looking at that!  AND, they actually looked happy to be here! BUT people could go right in when they arrived.  None of this standing around and herding people like sheep business.  No, not for us.  Although there was a bit of a cram as many of them in as possible like those evil chicken farms where they all poop on one another and get sick and stuff. Our venue had a nice amount of people in it, not completely packed, but just about.  Average age, probably 22?  (A much younger crowd than our Launch Show, which was interesting – Thank you first years!) Good laughter!  Absolutely no chance for telling the same joke over again.  If we fucked up or missed a line, we just kept going because we don’t have the luxury of an editing room.  This is LIVE people! People actually got excited for our stuff though, it didn’t seem so generic, laugh here, clap here. I think there was a bit more surprise to our show.  Not that stand-up monologues and sketches really compare in the kinds of laughter you get out of them, but still, ours felt good.

It was really cool to see a live taping of a television show and it was super cool that Ron James made a plea to get people to go check out live comedy.  I guess he feels like he owes it to his brethren.  He knows what it’s like to be working the circuit.  He’s made it, it’s easy for him now.  He has a team of writers, make-up, wardrobe, professional everything, GOVERNMENT FUNDING!

US?  We had fun.  We have the satisfaction of having put something together, worked our butts off at it, and performed.  No network censors.  No elaborate spending.  Just pure, raw comedy!!!  We’re just getting started.  We’re at the opposite end of the career-spectrum as RJ, and it’s an exciting place to be.

Rehearsals for our upcoming LaughDraft show are going well and we’re set to get into the space for a cue-to-cue tomorrow.  The only thing worrying me right now is that we won’t have as many people as we did at our first show, which was a huge success.  The difference, this time, the money’s coming to US.  The first show was a fundraiser for the Kapisanan Centre, but now, we’ve paid our dues to rent the place out and the rest is coming back to us, so we can continue to make videos and better content for our website.

This isn’t a plea to get people to come out to the show (well, maybe kinda) but it’s more an insight into my anxiety.  What if we flop?  I know we’ll just try again, but what if more people lose interest?

They shouldn’t, and I really shouldn’t worry, because the show’s going to be great.  I know.  I was at rehearsal. Now all we have to do is figure out how to end the show & we’re golden. 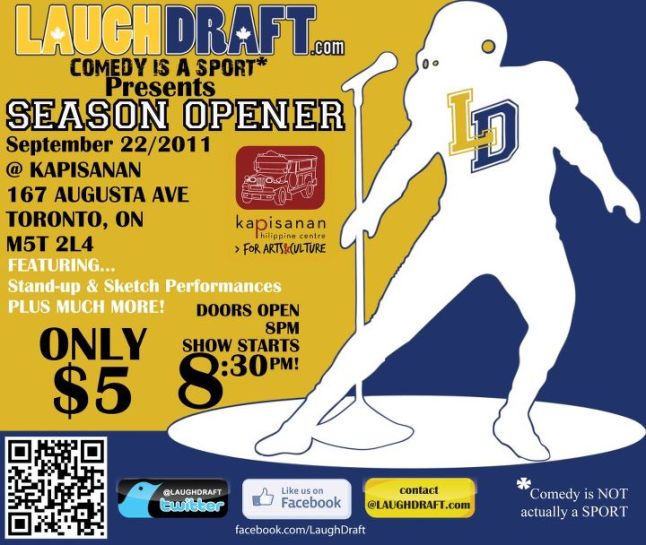