Last night I was asked to attend and “evaluate” the second night of a stand-up comedy showcase exercise put on stand-up guru Larry Horowitz, for half the graduating class of the Humber College – Comedy: Writing & Performance program.  An exercise I recall a little more than I would like.  In fact, when I went back to my blog posts from last year to see what I had to say about my own performance in the showcase, this is all I was able to extract:

If at first you don’t succeed…swear & curse a bunch, have a good cry, insult others who did better than you then immediately regret your bitterness, jealousy and resentment, wallow in self-pity, do harmful things to your body and mind… and try, try again.  – April 5th 2012

Suffice it to say, I wasn’t pleased with my performance. Nor was I please with the results I’d got back from the evaluators who, like I tonight, had watched the showcase. And therein lies the beauty of time and experience. Oh how the tables have turned! Get ready, class of 2013, to feel the wrath of …the evaluator; someone who is taking your art and judging it on a completely subjective basis.   And watch out! I’m gonna be REAL subjectiv-y!

In all honesty, there were a number of strong acts last night. A cut above the rest was Darren Springer, whose mix of the wonderful and the absurd is just such a delight.  The bit about his father’s tone as he’s been trapped in the trunk of a car in Columbia is the perfect contrast of the ordinary in extraordinary circumstances. A classic comedy convention, but so well-delivered with such ease and comfort; you get the sense Darren really loves being up on that stage.

Other great sets tonight included the closer for the evening, Ryan Dillon – who’s got storytelling embedded in his genes, I’m sure. (Ryan’s a Newfoundlander.)  Sitting on a stool, he took us on a sad, sad, hilarious, but very sad journey growing up without a father – with a little insight into the airline industry.  (Did you know that if your parent is an airline employee, and they die, you get a free trip to DisneyWorld?!) Sarah White knocked the crowd dead with her sexy Star Wars switcheroo.  Colin North also had me giggling about his dead dad.  Come to think of it, dead dads were a bit of a recurring theme tonight.   Dead dads, and being a socially-awkward, ill-at-ease, unable-to-maintain-relationships-with-the-opposite sex, relatively dysfunctional human being.

I was impressed by the variety of voice work – lots of fun accents by Samia Darkazalli, Liron Jacobs and Jay Freeborn, who went into an elaborate bit about Pokémon, which normally I would care less about but because of the energy of the delivery and the fun wordplay, it stood out to me.  I’m a sucker for wordplay.

Ben O’Neil and his musings on the Kraken fit perfectly into the realm of the ever-increasing market share of nerd humour/culture.  Love it or hate it, you can thank (or curse) BBT for that.

It’s no surprise that I wasn’t a fan of the comparing women to dogs elements of the show or the multiple bits about racism, even the ones that were meant to call racists out on their shit, it’s just… I didn’t see a fresh take on it, and until then, I’d rather stick to what the pros have already said on the subject, rather than the not-so-deep musings of early-twenty something suburbanites.

That being said, it’s no surprise the acts that stood out to me can frequently be found performing in dives around Toronto to work on and improve their craft.  There is such a striking difference in quality and in confidence between those who perform stand-up regularly, and those who maybe memorized their set a few hours before last night’s showcase.

So, for those of you who do work hard, and practise a lot, and still didn’t get the grade-result you were looking to achieve in this exercise, don’t worry.  Even if you don’t end up performing stand-up in the Industry Show, don’t worry.  I said Don’t Worry! If you work hard you can totally get in Fresh Meat, have a live and professional taping of your set available to pitch to festivals, get an agent, book a Fringe tour and get a full-time administrative position at the CBC.

It’s been almost two weeks since I’ve been back from the Ottawa/Montreal leg of our Comedy Before the Frost tour and I still haven’t had the time to post any of the photos or videos.  But I’m working on it.  I promise.

I had my first Level D class at the Second City Training Centre this past Monday (Rob Baker‘s my teacher – So excited! Uh… the comedian, not the dude from The Tragically Hip – although that would also be cool.) Afterwards, I huddled and dodged the hurricane over to the Main Stage to check out the last little bit of the 2012 Cream of Comedy show, where those 5 performers who were selected from Fresh Meat got to battle it out one last time in hopes of winning the Tim Sims Engouragement Fund  Finally, Christi Olson was declared victor and was awarded  $5k & a scholarship to the Training Centre.  Good on her.  She’s hilarious and totally deserves it.  Also, I hear she needs money to buy meds, so… good.  Comedy’s literally keeping this girl alive.

Kudos to the producer Deanna Palazzo for putting for the hard work she put into Fresh Meat and CoC this year.  They were both really fantastic performances, which ran smoothly, professionally and hilariously, just as planned.

I don’t know why, but because I didn’t know Tim Sims, I derived great pleasure out of recognizing him from the old Reese’s Peanut Butter Cups commercials where he played Rory Tate, the scientist tracking mysterious peanut butter and chocolaty crop circles.  I REMEMBER those! I guess it makes me feel better because I can acknowledge that though I never got to see Tim perform live, some element of his performance has been ingrained in my memory – so I feel better about being nominated to be in a competition for award in his name.  Does that make sense? I don’t care.  It does to me. 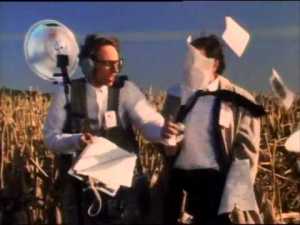 IT DOES TO ME!

Anyway, C0C was hosted by Kristeen von Hagen, who is hilarious.  And,  having heard she was in town, the wonderful Jess Beaulieu snagged her up to headline her and Laura Bailey‘s popular CHICKA-BOOM show, on which I got to perform with some other fun sketch and improv comedians and none other than Royal Canadian Air Farce veteran, Luba Goy.

She performed a great little bit of stand-up and included some of the fan favorites, including Kim Campbell & Donald Duck.  After the show, Luba kept us out too late for a Sunday, telling the hosts they need to hurry up, get married and have babies (not with each other…) before their parts dry up.  She then picked up what is probably the Free Times Café owner’s family heirloom, a sweet old accordion, without permission and went to town on it – telling us tales of her own one-of-a-kind childhood accordion, which her friend traded in sans permission.  Tragedy, right?

Who could say anything though? She’s Ukrainian Canada’s sweetheart!

Also, Luba tells me I’m no longer allowed to drink sweet white wine, so… I have to settle for Pinot Grigio these days.

YOU HAVE TO DO WHAT LUBA SAYS!!!!  BAD THINGS WILL HAPPEN OTHERWISE.

There are two things I would have liked to have ready to post on this, the second anniversary of my little blog:

But as it turns out, I’m still broke and I didn’t make it onto Cream of Comedy…

Somebody get me some chocolate cake. 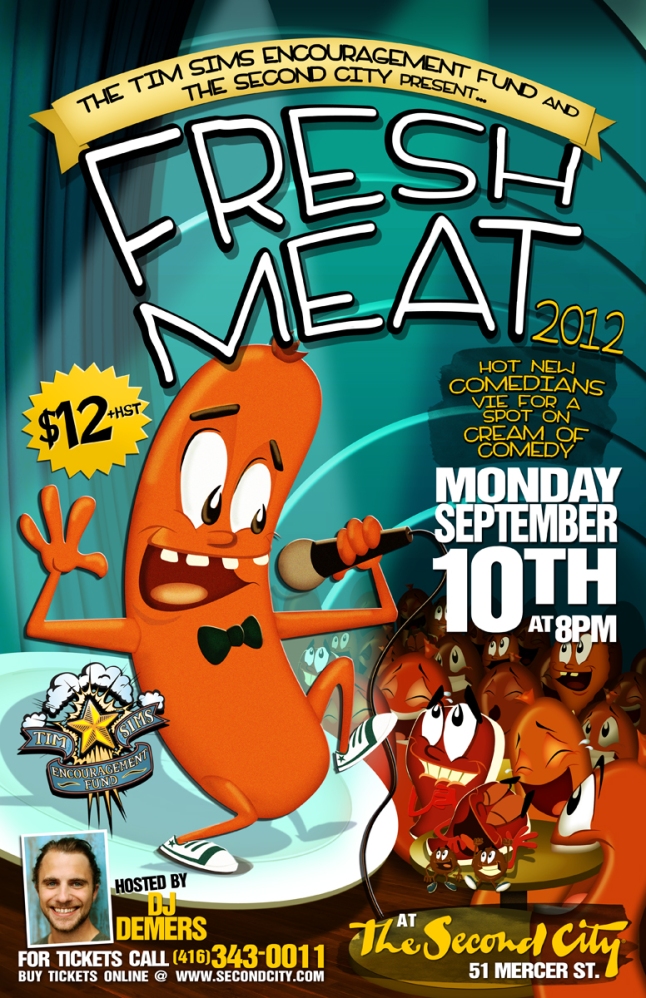 I volunteered for the Canadian Comedy Awards again this year, which was great!  (With the exception of the biggest joke of the night: $13 + tip glass of wine.)  I worked in the box office throughout the end of last week to sell tickets for shows put on by nominees in the various categories.

(If you’re curious, you can see the results of the CCAs right HERE.)

Then, I worked backstage for the actual Awards ceremony, where I had the pleasure of un-blazer-ing Alan Thicke of TV fame, holding stuff for Gavin Crawford, also of TV fame – and basically running about rounding up presenters for the rest of the evening.

The after-party was a lot of fun as well – every year I know a few more people at the CCAs & feel more welcomed as part of the community.

I’ve been working so much this summer in the evenings, and whenever I’m NOT working, I was trying to find jobs, or trying to network, or updating a resume, or writing, or doing ANYTHING to improve my financial situation (which was, until very recently, at risk of requiring me to move back to Welland…) that I haven’t been able to go out and perform as much as I would like.

In fact, tonight, at Comedy @51, I performed the set I wanted to do for next week’s Fresh Meat and it sortof flopped.  I’ve run over in my mind a bunch of reasons why it didn’t go well, and I’m glad I still have a few more nights this week to rehearse it, but only at the beginning of the week, because guess what – Thurs, Fri, Sat, Sun evenings, I’ll be cleaning tables and pushing drinks at work (ie. NOT rehearsing.)

There is some hope though, at least financially.  Last Wednesday night, I was surfing craigslist looking for work (as one does when one becomes desperate) and I applied for a few.  Thursday morning, whilst at Canadian Tire getting an oil change, I got a phone call asking if I was free to come in for an interview for a job as an Office Manager in Richmond Hill.  I went to the interview and, despite my profuse nervous sweating, I got the job and started the next day, Friday.   It’s a 9-5 temp job (with the *fingers crossed* possibility of extension – depending on what the boss says when he gets back from vacation,) which would allow for free evenings to go out and practice the work I so desperately want to do.

Ugh.  I’m a great big ball of stress right now, folks.  But this is the life of an artist, so I’m told.

“The Tim Sims Encouragement Fund (est. 1995) and The Second City are pleased to present ‘Fresh Meat 2012’, a showcase of the hottest fresh new faces on Toronto’s comedy scene. On Monday, September 10th, 2012 at 8pm, Toronto’s best up and coming comedians will strut their stuff at this exciting annual comedy event.”

I woke up to the announcement of the line-up for this year’s Fresh Meat showcase, and was excited and pleased to see yours truly listed on a line-up of otherwise exceptionally talented funnyoids, which is what I call comedians.  Or at least, will begin to do henceforth.

They idea here is that we’re competing to continue onto the next round of performances entitled: “Cream of Comedy” and the winner of CoC is awarded the prestigious Tim Sims Encouragement Fund – a scholarship to the Second City Training Centre – and a whole bunch of other awesome goodies too.

For more information about the Fresh Meat show ticket-purchasing process, go here – and for more details about the Tim Sims Encouragement Fund, click here.  Go forth and exchange knowledge of this event, because it’s gonna be a good one.