OK. I’m celebrating a small personal victory today. I did a thing I’ve been putting off for months; literally I intended to do this thing as soon as I began my leave from my day job. But I did it today. Many months later. Finally! I’m not going to say what it is because it I don’t want to jinx myself,  so sadly this is going to be a bit of vaguepress post today.

But, what I will say is the reason I was holding off was because of a fear of judgement.

I teach improv, and I tell people to behave silly all the time, in a way that normally they would fear due to our innate self-preservation. But here I am, the improv teacher, holding back because I’m afraid of what people will think of me. Or how they might classify me. Or that I’ll be completely rejected due to a lack of experience or because I look the way I look. For all these reasons I didn’t do the thing I wanted to do. Until now.

Today I did the thing. The vague thing. I put myself out there and what I’ll get in return I have NO idea, but at least I took the step that needed to be taken. Otherwise there would be a guaranteed negative return. “You miss 100% of the shots you don’t take” and whatnot.

I’m taking a second to bask in the fact that I finally did that thing. The immediate response is a satisfaction for having done it.

Now to see if it yields anything.

One day, when you’re rich and famous, all I’ll have to say is: “Yeah, I was in Ashley Moffatt’s play in comedy school” or “Yes, I was in an Ashley Moffatt production once. We go way back” and it will – hands down – get me some action.

… but in the meantime… 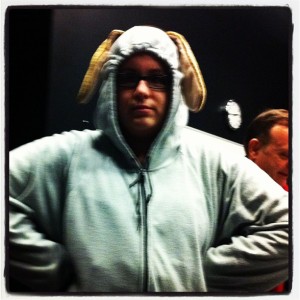