A woman in my class this week told me that since our first class, where we learned what it means to “yes and,” she noticed the amount of times over the week that she had the tendency to write “but” in her text messages. She attempted to take the advice learned in class in order to make her text communications more positive.

In improv, “but” is basically the same as “no.” It’s telling your partner you’ve heard what they said (maybe); you don’t like their idea, you think you have a better idea, or more likely, their idea scares you and you’re worried about how to pull it off,  so you’re going to try to squeeze in your safer idea in the scene instead.

“Ok honey, but the moon’s too far away, so why don’t we just go to the grocery store instead?”

“No. We’re going to the grocery store.”

It’s sometimes remarkable that people think they’re listening and responding positively, when they’re really steering the scene (or the conversation, or the making of plans, in a non-improv setting) to discount their partner’s ideas or wishes.

Maybe we could all benefit from my student’s exercise. For one week, notice how often you text “but”, use “but” in an email or say “but.” Reflect on it. Is that “but” necessary? Or are you using “but” to turn down someone’s idea or invitation because you think you have a better idea or because you’re afraid to know where theirs might take you.

All this to be taken as a reminder that it doesn’t take a hard no to refuse someone’s offers and ideas, onstage or off. 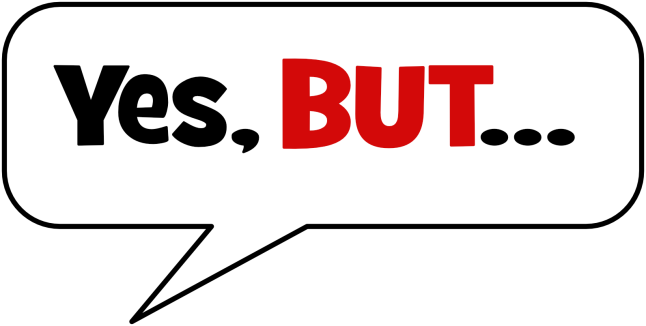 If this blog post has opened up some bubble in your brain and you want to read more about “but,” in a context other than improv, check out this Fast Company article:

The One Word That’s Undermining Everything Else You Say

“If you never used ‘but’ again, you’d be just fine,” she says. “It’s a conjunction used to marry two completely separate ideas. Why do that?” – Karin Hurt

(PS. they totally mention improv in the article)