I received the nicest compliment yesterday right after Guess Who’s Coming to Improv? from a woman who had tried improv for the very first time that night at the show. She and I had played a scene together during the show. My get for our scene was “chest hair.” It was a short scene, but a striking one nevertheless.

After the show, she told me something along the lines of: “I was so glad to see it was you standing on stage, because I felt like no matter what I did, I could feel safe.”

It was the greatest compliment I’ve received as an improviser.

And to those who were in the audience, it was a hilarious and surprising scene. 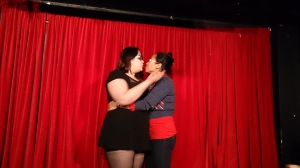