This post has nothing to do with Humber College’s Comedy program.  This is simply a report of how I am spending my Saturday morning/afternoon.

I am currently on the hunt for two lost items, which I have not seen since I moved here in May, but which are vital in my returning to the gym.  You see, I recently purchased a new pair of gym shoes (Nike… under $50, which is AMAZING!  Go to the outlet store in Niagara Falls.  Great deals! GREAT DEALS!!! AND… the swoosh is orange… ORANGE! Can you believe that?!) 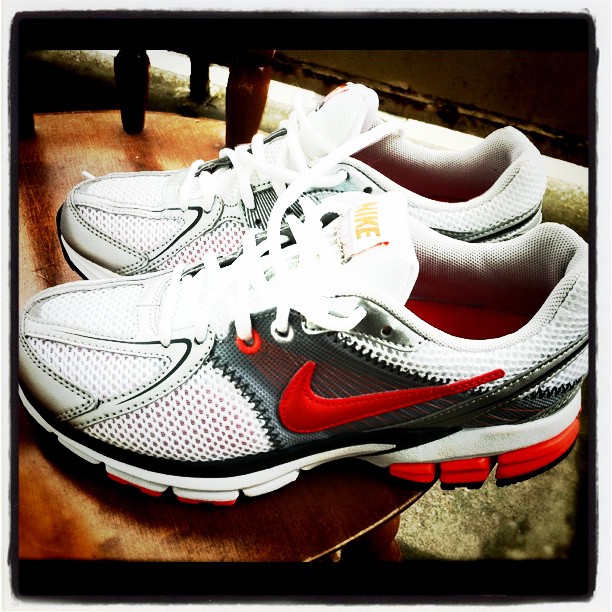 Anyway, I’m one of those people who believe they need a certain set of things in order to work out to full satisfaction (ie. I’m lazy) and I’ve been avoiding the gym lately, despite the purchase of new shoes, because I cannot find my little iPod Shuffle (the one that’s great to bring to the gym) and my Dudley lock (because I can’t go to the gym without a lock.  I’ll get my shit stolen.  This is Humber Lakeshore, people.  I’ve already had a credit card stolen from there.  A credit card.  Don’t worry, I got reimbursed)

So… I’m going to leave this post open throughout my cleaning day, and upon hopefully by the end of my cleaning journey I will have found those two missing items.

I’ll post other observations along the way.  Such as:

2) They were not in my closet. Despite my assumption that I might have mistaken the metallic colour and weight of the lock as a tool and put it in my toolbox, alas, it was not there.

4) HOW could I have not played catch/baseball/softball OR tennis all summer?  This, is a tragedy!  Anyone wanna throw a ball around before it gets too cold?  (In other words, I found my baseball & tennis gear.)

6) I’ve looked through HALF  of my apartment and so far, NO LUCK… I think I’ll roll up some coins.

7) PROGRESS!  I found my earbuds.  They will be better to use when sweating than my new noise-canceling ones.

Break-time.  I’m going to get lunch.  Maybe the lock and iPod will magically hop out of their hiding spots while I’m away. *fingers crossed*

OK.  So, nothing magically appeared while I was at the grocery store buying bread and maple cookies, so… back to the hunt!

8.   OH NO!  I killed Che Guevara!  I had a mini-statuette of him & Castro, which some asshole brought back from Cuba, but that I thought was awesome, so I still have it… well, until it fell of the shelf and shattered into hundreds of pieces.  Oh well, so long Che.  Way to fight the good fight! At least I still have your head.

Reunited and it feels so good!

NOW… you might be thinking: “Why the plop doesn’t she just go out and buy a new lock!? What is she, a stupid-head?”  OK, but ladies and gentleman, I have had this combination lock since my cadet days, all throughout high school and any time I’ve been to the gym after that.  I remember the combination so well that if I got another lock, I would probably never remember the combination and embarrassingly ask Humber facilities management to take out the giant lock cutters and THEN, I’d have to buy ANOTHER lock… Do you see what I’m getting at people?

10)  I found another basket of crap I was hoping maybe my lock would be hiding in.  Sadly, it was not there.  I did find a lot of fun useless junk, including my Empire Theatres name-tag and some 50-cent stamps.  THOSE were the days!

11) I have now cleaned my entire “workstation”/ the area in my room where stuff most frequently piles up/gets lost.  This is where I was most positive my lock would turn up, but alas, no sign of it yet.  I’m beginning to lose hope…

12) I FOUND A BUNCH OF VHS tapes and got super excited, until I remembered I don’t have a VCR. Hey, does anybody have a VCR?

13) OK!  The main room has been stripped and searched.  All that’s left now is the kitchen *shudder* and the bathroom *double shudder*.

OK, so I decided not to clean the bathroom and I only managed to get the dishes done in the kitchen BECAUSE I opted for making banana bread, grabbing dinner with Dan and watching hours worth of Breaking Bad…I know this is pretty anti-climactic, but… I’m pretty sure I lost the lock in the move, so good riddance 9-52-30.  You’ve served me well.  Maybe you’re at my parents’ place in Welland and I’ll find you in the basement one of these days, maybe not.  Either way, I’ve just given myself an excuse to buy a new one with purple flowers on it. I LOVE FLOWERS!